Peter Vander Auwera (@petervan) and me were at the TEDx NewWallStreet event in Mountain View, CA, on March 9th. The event was the first one to feature a SWIFT speaker  – Peter!

The event was curated by Bruce Cahan (@brucecahan), an old timer – to put it this way as he is with us since almost the beginning – of Innotribe, and “mceed” (mc = master of ceremonies) by Camilla Webster (@camillawebester).

Bruce has many facets – he is a social entrepreneur and an Ashoka fellow, passionate about a project he calls Goodbank. He is also co-founder of Urban Logic, a nonprofit. He is an architect of systems with for example NYMAP- a geo-tagged map of NYC. As such  he was part of the command center responding to 9/11 attacks.  I love his friendliness and passion about everything he does. He took us for dinner the day before the event in old Palo Alto, and he was an excellent guide.

I got to know Camilla for the first time in person. She is a very well know journalist for Forbes and Huffington Post and she is coming up with a new book – I love the title! –  “The Seven Pearls of Financial Wisdom: A Woman’s Guide to Enjoying Wealth and Power.” She gave us one of the pearls in her opening of the event, which I’ll preciously keep for me until the book is out! 🙂

We then went into the heart of the subject – the talks!

Before I get there, let me say a few words about the location – the Computer History Museum (CHM) in Mountain View. About 5 minutes from the Googleplex, the building hosts hardware and stories of the – young – history of information science. Where can you see computer code written in 30 cm font on printouts hanging from walls? At CHM of course 🙂 Seriously, if you’re even remotely interested by computers, it’s an excellent 2 – 3 hours visit. This was not my first time there, as the location is very popular for seminars and conferences. Last year, I was there for the Internet Identity Workshop (IIW).

We started the day with a very soft touch. Ken Kruzska – a very calm and humane guy – set the stage with a simple message – money is all about humanity. Many millions of foreign workers in the USA and California send money back to their families. For these families, money is an incredible enabler. And we should make sure there is as little or no obstacles to this flow of money.

After this very emotional kick-off, we dug into the first hard subject – big data and how the enormous computing capacity that is available can be harnessed by banks to increase welfare.  Doug Merrill, founder and CEO of ZestCash, explain how a better computed credit score (based on aggregating huge amounts of data, low cost storage and computing power) can lead to a better life for people because they have a correct score. 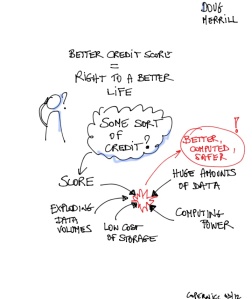 A second subject was somewhat unexpected (at least for me) – the fact that basic accounting, planning and budgeting skills were an absolute must for small and medium business owners. First, we had Shivani Siroya of InVenture, explain how her company provides some very basic but immensely effective financial tracking tools to developing countries businesses. Imagine this – an SMS based accounting! Then we had Jake Soll, an historian, explain how the double book accounting practice, invented in the Renaissance period, is still a critical enabler to do business today.  He explained this in a very fun way telling how Necker tried to introduce proper accounting in the pre-revolution France.  These were excellent talks, basically saying that there is some essential education effort needed to make sure basic accounting and budgeting skills were there for the masses.

A third subject, truly fascinating, was about where the New Wall Street should focus to invest. The theory developed by Howard Gould, co-founder of Tundra Capital LLC, is that we should focus on essentially  (brick&mortar) infrastructure, rather than the current focus on pure ventures. The needs of the exploding population and in particular the middle class are enormous! 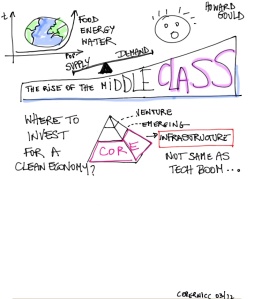 Then we had the Innotribe’s Petevan! For his first TEDx speech, he painted a very broad picture about how established companies should innovate – in a sandbox and with passion – and he gave the example of the Digital Asset Grid project Innotribe is currently incubating as a major disruptive scenario for the digital economy.

There were several other speakers I didn’t get to hear because of some calls I had to take and then I had to leave early to catch my plane from SFO. Sorry I couldn’t hear you all, in particular Simon! Next time…

If the silicon valley wants to be the New Wall Street, it needs to establish itself as the sandbox (where it can experiment) vis-a-vis the NYC castle (the core of finance).

And my conclusion is: Innotribe can and should help!

This work by Kosta Peric is licensed under a Creative Commons Attribution-NonCommercial-NoDerivs 3.0 Unported License.

Innovation is much more than the simple interchange of the position of the earth and sun. Follow me on Twitter: @copernicc View all posts by Kosta